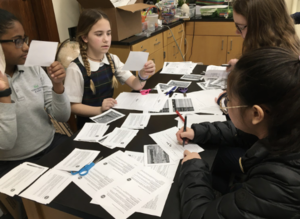 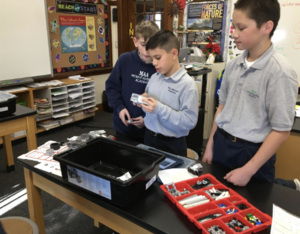 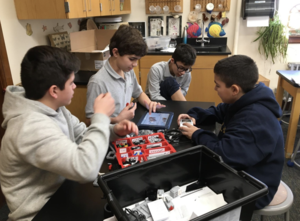 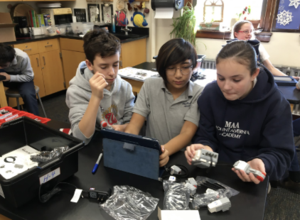 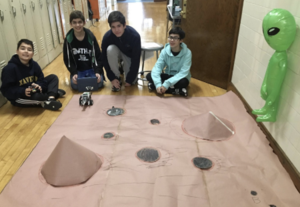 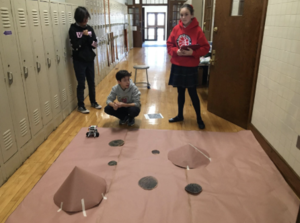 MAA’s sixth-graders have won the Massachusetts Junior School of the year from the National Energy Education Development (NEED) Project for their outstanding energy education project: Mars Rover Project. Made possible by the generous donation of an MAA family, this project utilized LEGO Mindstorm robots, which students programed to traverse a section of Mars. Students learned about energy, the solar system, coding, and more in this interdisciplinary project.


MAA’s students loved the challenge of bringing together their lessons from Mrs. Maria Lyons’ Science Class as well as Ms. Victoria Frieswick’s Technology Class. “The Mars Rover project was a very fun and interesting project that took us from the classroom to Mars,” one student said. “In this project, we had to create a rover that was coded to navigate a small section of the Mars terrain to get from point A to point B. We also had to design the rover and make sure not to use more than 50% of our energy, so that the rover could get back to point A. Overall this project was a great way to practice our robotics and coding skills, and also to learn that it is very important to pay attention to all the little details when designing a robot,” she concluded.


MAA’s sixth-graders researched the environment of Mars to determine the similarities and differences between the Martian and Earth environments, especially in temperature, water, gravity, and energy sources. While constructing their Mars Rovers, students had to take into consideration the terrain of Mars. They rose to the challenge of programming their Mars Rovers and the process of devising and revising their plan. “Our group decided not to take a lot of 90-degree turns. Instead, we decided to set a straight line between rocks,” one sixth-grade student stated. “One issue was trying to get the bot to turn the right amount. The tires we were using meant that turning the tires 80 degrees would not result in the bot turning 80 degrees. We had to calibrate the robot a lot, but after a few attempts, we passed with a great score! I loved the project overall and hope our school continues doing it,” the student concluded.


The students even created the model Mars landscape that they had to traverse. They crafted the martian landscape by extrapolating dimensions given by NASA and by creating mountains and craters with construction paper. MAA’s sixth-graders found the geology of Mars fascinating and enjoyed the creative process. “Something interesting that I learned during this project is that volcanoes are not only found on planet earth but also found on the red planet, Mars,” one student stated.


Perhaps most importantly, students developed teamwork skills that will serve them well far into the future. As with all academic disciplines, but particularly the STEM fields, the ability to collaborate is essential to success. “I learned a great deal about teamwork and precision,” one student reflected. MAA’s fifth-graders are looking forward to participating in the project next year and incorporating what they have learned about energy, space, and physics from the award-winning STEM Fun Fair to programming their very own Mars Rovers. Congratulations to our sixth-graders and Mrs. Lyons on such an awesome project. Looking forward to next year’s results!