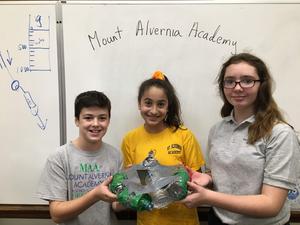 Mount Alvernia Academy’s STREAM Program has won yet another STEM Award! MAA won the 2020 School Group Award for Ocean Stewardship from the New England Aquarium (NEAQ). In its award letter, the NEAQ commended MAA for its work in the classroom: “The entire nomination committee felt that the school exemplified what it means to be involved in community-wide engagement aimed at raising awareness of how our lives are interconnected with the ocean and aquatic systems.” In the award application, MAA Science Teacher, Mrs. Maria Lyons, detailed her students’ work on Endangered Species Day, recycling, the sixth-grade STEM Ocean Plastic Challenge, fourth-grade ecosystem work, fourth-grade weather and climate change lessons, and grade five renewable energy work and how each of these relates to the ocean. Best of all, MAA’s students loved all the projects and learning about the importance of conserving our oceans. Below is an essay written by two MAA sixth-graders on the Ocean Plastic Extractor Project. Congratulations to all who contributed to the projects that won this award!

One of the most fascinating projects we have done at Mount Alvernia Academy was the “Ocean Plastic Extractinator Project ''. This was an intriguing project that involved not only knowledge of oceanic sciences but also teamwork. We had to create a boat out of plastic bottles that could support a motor and pick up plastic. Not only did we have to come with an initial Design, but we also had to make our extractor out of plastic bottles. This did not only give us the challenge of using one material but we were also able to recycle while doing it. We had to make it float and we had to put a motor on it so it could go around the bucket of water and pick up all of the plastic. This motor could not get wet, meaning we had to create a small waterproof compartment in our boats. This project was a great combination of engineering and learning about how plastic affects our oceans.

We believe this was an important topic for our class to learn about because this is our future. If we don’t start taking care of our oceans now, they might not be there tomorrow. Mrs. Lyons had a great way of not only teaching us about how pollution affects the ocean but also how we might fix it. This project was awesome because not only did we learn a lot about pollution, we also worked as a group and had a lot of fun. Projects like this one will be one of the things we miss most about our time here at MAA.