Looking Forward to Another Fun Year for MAA's Band! 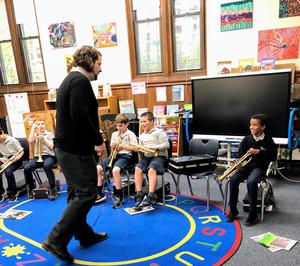 MAA is lucky to partner with Paul Effman Music to teach our students to play everything from the clarinet to the saxophone and now, for the first time, the violin.

Walk MAA’s halls on any given Monday and you will hear the sound of 60 plus elementary school children trying to tune their instruments. It may not sound like the Boston Philharmonic tuning up, especially the first few weeks of the year, but you sure hear excitement and enthusiasm.

This year marks the first year MAA is offering string instruments, which gives our 1st and 2nd graders the chance to participate in the program.  Additionally, we have an impressive 64 students in the program. John, who has worked with MAA through Paul Effman Music for 15 years, appreciates that MAA has always had a strong core of musicians that are eager to learn. “I teach at seven different school programs. The schools, like MAA, that have a good general music program have a big advantage -- they are a lot of fun to work with,” John said. “Music is about culture. When students are exposed to it on a regular basis, they grasp the fundamentals and begin to understand what makes music, music! It’s amazing to see it all click and fall in line,” he continued.

MAA students have the chance to show off their skills and perform for family and friends a few times a year. Some students are even asked to join the Catholic and Private School Honor Band. “We have a lot of fun and put on a good show,” John said. One of John’s favorite parts of teaching band here at MAA is that culminating moment at the end of the year concert, “I really get behind the end of the year concert. That last note in the last song, when the baton goes down and then the instruments go down -- it all comes together, the whole year,” he said smiling. “They hear applause for something they did, maybe for the first time. Seeing them get that electric excitement from performance, that’s the really cool part. You see it in their eyes when they get bit by the music bug and you know they will play music forever!” he laughed.

The end of the year concert is a long way away, but students here are already discovering the joy playing an instrument can bring. A huge thanks to John and the entire Paul Effman team as well as our very own music teacher, Mrs. Sarah Moore for bringing music to our school. Stay tuned for more on our next performance!