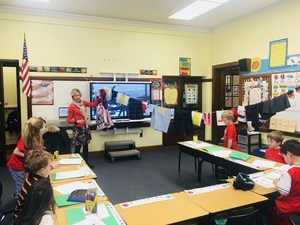 Madrid and the banks of the River Manzanares are half a world away, but for Mount Alvernia Academy Spanish teacher Señora Marta Rosado, MAA feels like another home. “It reminds me of my school days when I was a little girl in Madrid,” she smiled.

The school’s tight-knit community and mission are close to her heart. She cherishes the opportunity to share the culture and language of her birth with young and eager students.

An MAA student’s Spanish training begins in Pre-School. With fun activities to help them grasp the basics, Señora Rosado has found Spanish comes more easily for her youngest pupils: “Children’s’ brains are able to soak-up a foreign language at an impressive rate,” she said. “Exposing a child to a foreign language will result in much earlier and better fluency than if they learn later in life.”


Though she cannot imagine doing anything else these days, Señora Rosado did not envision becoming a teacher while studying in university back in Madrid. “I never thought of becoming a teacher after I studied law in Madrid. But, I also never thought it would be so rewarding,” she stated. The rewards of teaching are many for Señora Rosado, but watching her students grow from Pre-K to Grade 6 might be her favorite: “I enjoy watching students get better and improve their skills. It is a joy to watch,” she exclaimed.


Señora Rosado works hard not only to teach her students a new language, but also to introduce them to a new culture. She knows firsthand that learning a new language is as much about immersing oneself in a culture as memorizing new conjugations and vocabulary. “We know the importance of opening one's mind to learning about and embracing other cultures and perspectives,” she said. “We also know the positive environment it brings to one's life.”


Thanks to Señora Rosado, MAA students get to experience the joy of learning a new culture and language through their Spanish instruction. We are blessed to have Señora Rosado at MAA and are thankful for the fantastic environment she fosters in her classroom.